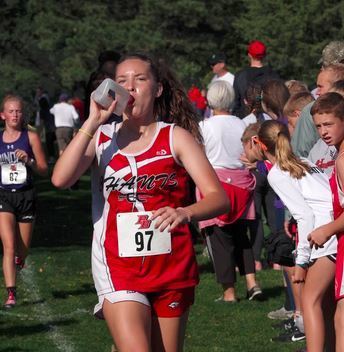 The cross country teams put together quality performances at the annual Broken Bow cross country meet this past Saturday.  In a meet that features some of the top teams in Class C and D along with a quality Class B team the Chanticleers were able to come away with 5 medals in the varsity meet.  “I was really proud of the way our kids competed in this meet”, Coach Derry Trampe stated. “This is always a tough meet with a lot of kids in each race and some really quality runners in the field.  You are always happy when you can come away with medals from this meet and we were able to pick up 3 medals with the girls and 2 with the boys. Now we just need to work on having our kids close the gap on each other as we compete for team titles.”

The girls had one of their best finishes in the last several years by coming in third with 45 total points.  The Chants were just 11 points behind Ainsworth, the defending state champions in Class D, and 9 points behind Class B power McCook.  Ainsworth won the meet with 34 points while McCook was right behind them with 36 points. “Our girls had a great meet”, Trampe said. “I thought we had a pretty good team this year but this meet really convinced me that we are going to be good.  Our girls are really running well right now and hopefully we can build on that as the season progresses.” Rounding out the team scoring were: Minden (72), North Platte St. Pat’s (96), Doniphan-Trumbull (101), Gothenburg (105), Arcadia-Loup City (115), Hi-Line (154), Broken Bow (190), South Loup (213), and Cozad, Maxwell, Valentine, St. Paul, Sandhills-Thedford, and Medicine Valley did not field enough runners to score as a team.  Kloe Severance was the top finisher for the Chants as she claimed fourth place in a time of 21:13 over the 5,000-meter course. Also earning medals with Kloe were Morgan Ritz (10th in 22:05) and Delaney Cargill (14th in 22:23).  “Kloe is a very consistent performer for us and she always runs near the front of the race”, Trampe said.  “I thought Morgan ran a great race and really finished strong in the last part of the race. I was also really impressed with the way Delaney ran in this meet.  She has really made a lot of progress this season and is a big plus for our team.” Just missing out on medals were Macy Warner and Abby Jacobs. Warner finished in 22nd place in 23:16 and Jacobs was right behind her in 23rd place in 23:28.  The top 20 finishers win medals in this meet.  “Macy and Abby ran great for us and it gives us a solid finish as a team”, Coach Trampe said.  “Macy is a lot stronger than she was last season and really runs races a lot harder than she did last season.  Abby is new to the sport but has caught on quickly since the first meet. With her and Macy running that close to each other it will give us a solid fourth runner in every meet.”  The other pusher for the Chants was Katie Magiera who finished 53rd in 26:19.  Hannah Masin also competed for the team and finished 67th in a time of 27:19.  “Both Katie and Hannah ran their best times of the season and that is what we want from them”, Trampe noted.  “The continue to show improvement every week and I am really happy with how hard they are working in practice and in meets.”

The boys scored 121 points to finish 8th in the team standings.  Minden won the meet with 50 points while Ainsworth was second with 55 points and McCook finished third with 59 points.  “Our boys ran well but we were a little further back in the team standings than I thought we would be”, Coach Trampe stated.  “Our gaps between our second and third runner and our third and fourth runner are a little bigger than they need to be to keep our score down.  In a race this size your team needs to run with a pack mentality in order to do well in the team race. That is what we need to work as the season progresses.”  Rounding out the team scoring were: Broken Bow (63), St. Paul (69), Gothenburg (105), Cozad (110), North Platte St. Pat’s (139), Doniphan-Trumbull (170), Valentine (194), Arcadia-Loup City (239), Brady (248), and Hi-Line, Maxwell, South Loup, and Sandhills Valley did not field enough runners to score as a team.  Colton Rowse led the team again this week with a fifth place finish in the race. Rowse completed the 5,000-meter course in a time of 17:56. Joining Rowse in the medals was fellow senior Reese Davenport. Reese finished 19th in a time of 19:05 to earn his medal.  “Colton is a very steady performer and he continues to run at the front of races”, Coach Trampe said.  “He ran a smart race and really showed a lot of speed at the end as he passed up two runners down the stretch.  Reese continues to have a really good year as he has earned a medal in every meet so far and this is one of the toughest meets we will compete in this season.  He looks like he could be an individual qualifier for state if he continues to work like he has so far this season.” Also scoring for the Chants were Bronson Blair and Hayden Kluthe.  Blair finished in 44th place in 20:31 while Kluthe was 61st in 21:30.  Both marks were their best times for this distance this season.  “Bronson has become very consistent for us this year as our third runner and I am pleased with how he is competing”, Trampe stated.  “This was the first time this season that Hayden has counted as a scoring runner for us so he is continuing to improve each week. Now we need to move him and Bronson closer to each other and both of them need to close the gap on Reese.  When we do that, we will be a very good team.” Serving as pushers for the meet were Blake Moderow (70th  in 21:56) and Gage Sintek (71st in 21:58).  “Blake and Gage both ran their best times of the season as well”, Trampe noted.  “They are both making progress and I am glad to see them that close together and within 30 seconds of our fourth runner.  We just need to have them close that gap and then challenge each other to move up in the field as the year progresses. These are talented runners and now we just need to become competitors.”  Also competing for the Chants were Trevor Vancura (87th in 22:53), Treaven Scheideler (101st in  23:29), and Diego Chacon-Arellano (104th in 23:56).  “Both Trevor and Treaven ran faster than they did last week at Ainsworth”, Trampe said.  “Trevor was over a minute faster and Treaven was about 20 seconds faster. Diego made the biggest improvement from last week as he took nearly 4 minutes off of his time from the previous week.  I am really pleased with the progress they are making and we just need to continue working hard in practice each day.”