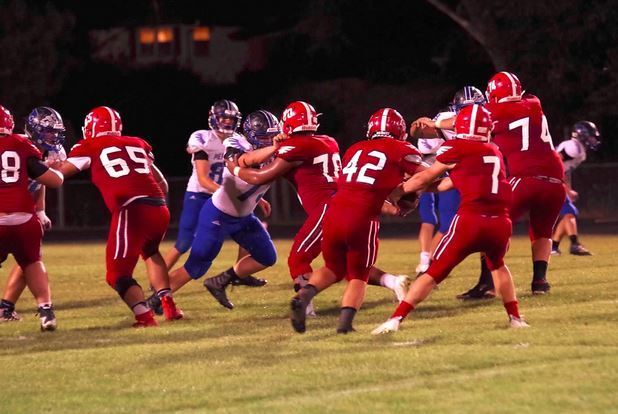 ORD, NE- A battle of ranked opponents turned into a tough day at the office for the Ord Chanticleer football team this past Friday. The number-two rated Pierce Bluejays came into Bussell Park hot off a 64-0 thrashing of Arlington the week before, but the Chanticleers were able to cool the Bluejay offense in the first half, allowing only one touchdown. The first half was a defensive battle on both sides with Pierce taking a 6-0 lead into halftime. The third quarter saw Pierce starting to break open the run game as they stretched their lead to 21-0 before junior quarterback Zach Smith punched in a touchdown on the ground to give the Chants their first points of the game. Early in the fourth quarter Smith scored again to pull the Chants within one score 21-14. The Bluejays managed another touchdown before the end of the fourth quarter for the final of 28-14. The running attack that had bolstered the Chants for the first two weeks was never able to get its footing in this matchup as Ord only managed 85 yards on the ground. On the defensive side, the Chant defense that had been so stout against the run in the early season allowed 470 yards rushing. The Chants showed some spark in the passing game as Senior wideout Riley Warner had 182 yards receiving on the game with a long of 47. The Chants will travel to Central City this Friday.