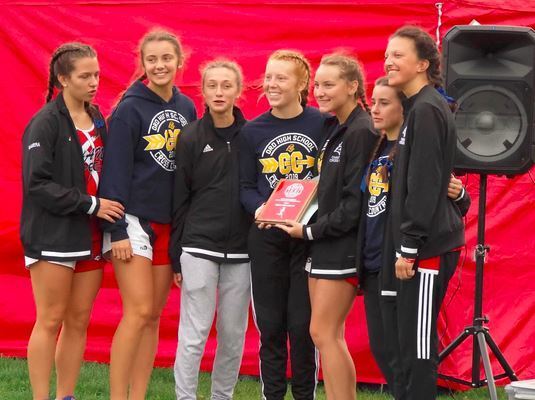 The Ord Cross Country Teams continued to show improvement on the season when they hosted their own invitational this past Friday at the Ord Golf Club.  The Chanticleer girls finished 2nd in the 17-team field while the boys were 9th.  “I thought we competed pretty well in our own meet”, Coach Derry Trampe commented.  “Sometimes when you run at home the kids are distracted and don’t have a very good day but this team is focused and they all ran well on the day.  We had several runners that ran their best time of the season in this race and we also had a lot of medal winners. I am pleased with our progress and I am excited to see how we finish the season.”

The girls had another solid day as a team and brought home another plaque on the season.  The team finished second in the meet behind the Class D defending state champions Ainsworth.  The Chants scored 34 points while the Bulldogs scored 22 points to claim the title. “Ainsworth has a quality team and our girls have really competed well against them all season but we just can’t quite catch them”, Trampe said.  Rounding out the team scoring were: Ravenna (44), Gibbon (52), Arcadia-Loup City (84), Burwell (97), Wood River (123), and Ansley-Litchfield, Centura, Plainview, West Holt, St. Edward, Sandhills/Thedford, Twin Loup, North Central, Broken Bow, and Central Valley did not field enough runners to score in the team race.  Individually they Chants had 5 girls win medals on the day. Kloe Severance led the team with a third place finish in a time of 20:42 over the 5,000-meter course. Delaney Cargill and Morgan Ritz finished 10th and 11th respectively in times of 22:05 and 22:21.  Macy Warner and Abby Jacobs finished 15th and 16th to earn medals as well.  Warner finished the race in 22:38 and Jacobs crossed the line in 22:43.  “As a group this is the best our girls have run all season”, Trampe said.  “I can’t remember the last time we had 5 girls earn medals in a meet so this was a nice surprise in a quality field of runners.  If we continue to improve like we have all season, we could have a very successful end to our season.” Katie Mageria had one of her best races of the season as well and finished 31st in a time of 25:16 to serve as the final pusher for the Chants.  Hannah Masin also competed in the meet and finished 50th in a time of 28:19. “Katie just keeps getting faster every meet and is going to get a race in the 24:00 minute range this season”, Trampe noted.  “Hannah ran a gutsy race with knees that are hurting but she always finds a way to work through the pain and I am proud of what she is doing for us this year.”

The boys scored 103 points to finish 8th in a close race for 6th through 8th.  Gibbon won the meet with 49 points while Plainview was second with 54 points.  “Our boys ran good races and several of them turned in their best time of the season in this meet”, Trampe stated.  “Having Colton injured and not running hurts us as a team but we need to have our other runners step up to make up for that.  I feel like we are getting there but we just need to cut loose and see what happens in our next couple of meets” Rounding out the team scores were: West Holt (74), Centura (76), Ainsworth (84), Wood River (100), Arcadia-Loup City (101), Ravenna (111), Broken Bow (114), and Ansley-Litchfield, Sandhills-Thedford, Central Valley, St. Edward, Twin Loup, Burwell, and North Central did not field enough runners to score in the team race.  Reese Davenport was the lone medal winner for the boys. Reese finished the 5,000-meter course in 18:57 to bring home a 12th place medal.  “Reese is having a good year for us and he has picked up a medal in nearly every meet we have ran in this year”, Trampe said.  Also scoring for the boys were Bronson Blair (26th in 20:08), Hayden Kluthe (35th in 20:48), and Blake Moderow (36th in 20:48).  “Bronson, Hayden, and Blake are running a lot closer together now than they were at the start of the season and that helps our team score”, Coach Trampe stated.  “We need them to get within 20 to 30 seconds of Reese and then our score will really come down.” Pushers for the team were Gage Sintek and Trevor Vancura. Sintek finished in 40th place in his best time of the year at 21:00.  Vancura was 61st in a time of 22:15.  “Gage just keeps getting stronger and stronger every week and his times are really coming down”, Trampe said.  “Trevor continues to run solid races for us even though he has been battling with shin splits for the last few weeks.”  Also competing for the team was Diego Guerrero. Diego had his best race of the season by over 2 minutes as he finished 65th in 22:52.  “Diego has really made a lot of improvement from the start of the season”, Trampe said.  “As he gets older and stronger he will be a pretty good runner for us.”