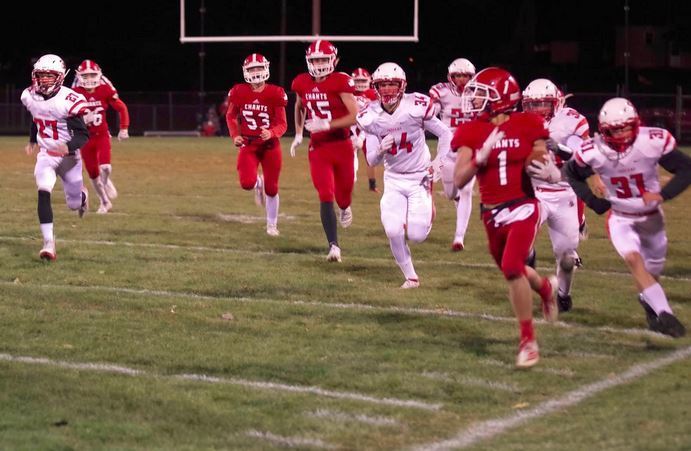 ORD- The Ord Chanticleer football team came into homecoming week with a number nine ranking in the state and a fair amount of momentum from the week before, as they faced the Broken Bow Indians. The Chants made easy work of the Indians, scoring the first 47 points of the contest on their way to a 54-15 victory.

Junior quarterback Zach Smith got the scoring started with a three-yard run on the Chants first drive of the game. After a quick three-and-out for Broken Bow, the Chants second drive was as short as it was entertaining, with Smith hitting junior running back Tommy Stevens on the first play of the drive for a 50-yard score. The Chants marched down the field on the next drive and Stevens carried it in from 7 yards out to give the Chants a 19-0 lead going into the second quarter.

The second quarter got off to a hot start, with some impressive running by senior receiver Riley Warner off a screen pass from Smith, that gave the Chants a 25-yard score on their first drive of the quarter. Ord followed that with another short drive, three plays capped by a 52-yard touchdown sprint by Stevens. After a takeaway on a fumble recovery by junior linebacker Garret Kluthe, the Chants marched down the field and Kluthe finished what he started by punching in a 1-yard touchdown to give the Chants a 40-0 lead with only 16 seconds left in the half. Junior Bentley Reilly finished the half off with an interception as time expired. The Chanticleers managed to score touchdowns on each of their six possessions in the half, no punts and no turnovers in a dominant display.

The second half seemed it would be no different than the first as Tommy Stevens ran 65 yards on the first play from scrimmage for yet another quick TD for the Chants. Broken Bow finally struck on an 80-yard strike to break up the Chanticleer shutout. Riley Warner returned the ensuing kickoff 55 yards to the Broken Bow 27 yard line and, with the next generation of Chanticleer football now on the field, the Chants did not skip a beat, putting together a drive that led to sophomore quarterback Johnny DeRiso running it in from nine yards out. Broken Bow managed one more score in the third quarter leading to the final of 54-15.

The Chants put up some impressive stat lines in this game as everything seemed to go right. Tommy Stevens led the way in the run game, carrying the ball 12 times for 217 yards, garnering a mind boggling 18.1 yards-per carry. Even though the Chants only attempted seven passes on the night, Zach Smith completed six of those throws for 141 yards and two Chants had 50 or more yards receiving, Riley Warner with 59 and Tommy Stevens with 50. The Chants had three men go over 100 all-purpose-yards, Stevens with 282 yards, Smith with 207, and Warner with 130. The Chanticleers head to Valentine this Friday for a 7 p.m. kickoff against the Badgers.