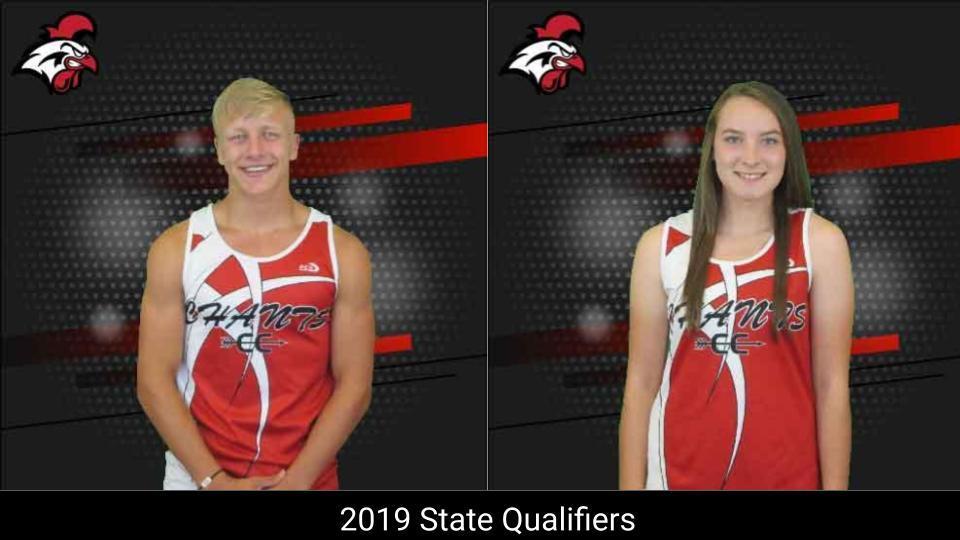 The Ord High School cross country teams competed in the very competitive C-3 cross country meet last Thursday in Pierce.  In a meet that featured several teams ranked in the top ten the Chants just missed out on qualifying the girls team for the state meet. “This was a really tough district with as many as five of the girls’ teams ranked in the top ten and we just missed out”, Coach Derry Trampe commented.  “Our girls and boys both ran as well as we have all year and we just came up a little short. I am really proud of the way our kids competed and just disappointed for them that they were not able to earn a team birth at state.”

The boys scored 120 points to finish 7th in the 11-team field.  Hartington won the meet with 44 points while Columbus Scotus finished as the runner-up with 53 points.  O’Neill scored 56 points to finish third and earn the last qualifying spot for the state meet. “This was one of our boys’ best performances of the season when you look at our times from the rest of the year”, Trampe said.  “I was really pleased to see us finish on a strong note and run competitive races.” Rounding out the team scoring were: Pierce (58), Boone Central/Newman Grove (72), Central City (104), Columbus Lakeview (131), West Point-Beemer (131), Wayne (141), and North Bend Central (211).  Colton Rowse led the team this week and earned a spot at the state meet with an eighth place finish in the race. Rowse completed the 5,000-meter course in a season best time of 17:43 for his 4th straight trip to the state meet. “Colton is a tough competitor and I am really happy that he was able to qualify for the state meet”, Trampe stated.  “He has had a tough year with a quad injury slowing him for most of the year. However, he was able to start doing some conditioning last week and able to run earlier in the week and held up well through the race.”  Reese Davenport just missed making the cut when he finished 18th in the race in a personal best time of 18:34.  The top 15 qualify for the state meet. “Reese had a really good year for us and I was really hoping he would make it to state”, Coach Trampe said.  “He beat a lot of people that had beaten him earlier in the season and ran his best race all year and there is not much more you can do.” Also scoring for the boys were Bronson Blair (46th in 20:09) and Hayden Kluthe (48th in 20:14).  Blair was one second behind his best time of the year and Kluthe ran his best time of the season by nearly 30 seconds. “Bronson and Hayden both ran one of their best races of the season and that is all you can ask for”, Coach Trampe said.  “Hayden has really improved since the start of the season and is going to be a great runner for us by the time he is done. Bronson was a steady performer for us all season and will be a big part of our team next year.” Pushers for the team were Blake Moderow and Gage Sintek.  Blake finished in 54th place in a time of 21:00 and Gage was right behind him in 55th place in a time of 21:07.  “Blake had a nice year for us and it was good to have him out again”, Trampe said.  “Gage had a good year and showed steady improvement all season long. He will have a good career for us as well.”

The girls scored 60 points to finish 4th and just miss out on qualifying for the state meet.  The top 3 teams qualify for the state meet and the Chants were just 2 points out of third.  “It was really disappointing for our girls to come that close and not make it to the state meet”, Trampe said.  “We ran really good races and did all we could do and just came up short. We knew we were in a tough district with as many as 5 teams ranked in the top 10 throughout the season and North Bend ran their best race of the season.”  Boone Central/Newman Grove won the meet with 23 points while Columbus Scotus finished as runner-up with 43 points. Those two teams are ranked 1st and 2nd in state.  North Bend Central grabbed the last qualifying spot by finishing 3rd with 58 points.  Rounding out the team scoring were Hartington (77), Wayne (90), O’Neill (124), Central City (130), West Point-Beemer (166), Columbus Lakeview (178), and Pierce did not field enough runners to score in the team race.  Kloe Severance led the team with a 6th place finish in a time of 20:28 to qualify for the state meet this week in Kearney.  “Kloe ran a really good race and got out early and stayed in the top 5 for most of the race”, Trampe noted.  “She has had a really good season and has a great chance to bring home a medal from the state meet this year.”  Morgan Ritz just missed qualifying for the state meet as she finished 16th in a season best time of 21:20.  It was her best time by over 15 seconds.  “Morgan has had a great career for us and I was really disappointed for her that she was not able to qualify for the state meet”, Trampe said.  “She is a great kid and has really done a lot for the cross country program the last 4 years. It is tough to know that she is done but I am glad we had the opportunity to work with her.”  Also scoring for the team were Abby Jacobs (21st in 21:42) and Delaney Cargill (24th in 22:04).  Abby ran nearly a minute faster than she had all season and Delaney recorded her second best time of the season.  “Abby had an outstanding race for us at the district meet”, Trampe commented. “She just kept getting stronger and stronger throughout the race and I am really pleased with how she ran.  Delaney ran a solid race for us again this week and has been a steady performer for us all year. I am really glad we had both her and Abby out this season because they made a real difference for us this year.”  Pushers for the team were Macy Warner and Katie Magiera. Macy finished 29th in a time of 22:35 while Katie was 41st in a time of 24:21.  This was Macy’s second best time of the year and Katie’s best time all season.  “Macy has had a really good season this year and made a lot of improvement from last year.  She is getting stronger and faster each year”, Trampe said. “Katie really made a lot of improvement this season and ran a great race at the district meet.  I was glad to have her as part of the team this season and to see the progress she made.”