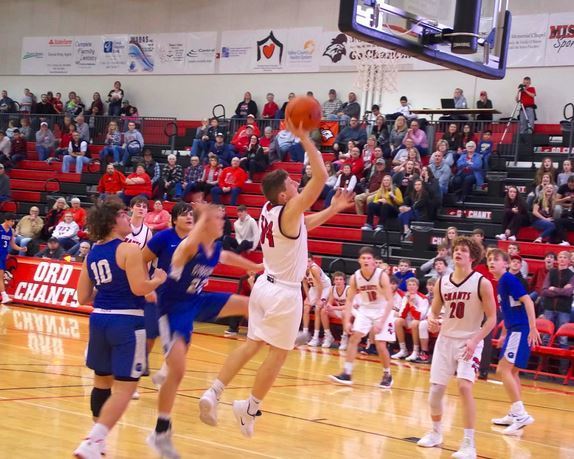 On Friday Night at home the Chants would need a little extra time to defeat conference foe Gibbon. The Chants would come out strong to start the game with a 10-2 lead. Gibbon would rally back with hot shooting to cut the Chant lead and even take the lead in the middle of the 2nd quarter. The Chants would claw back to get a 22-21 lead at the half. The 2nd half would be an even tilt with the teams trading leads and runs. Going into the 4th the game would be tied at 33. Gibbon would have a six point lead with 3 minutes left but the Chants would have a run of their own left to tie the game with a Hayden Grint lay up with 10 seconds left. Gibbon would get a shot off at the buzzer but it would not fall. The game would head to overtime where the Chants would ride the momentum and never let it go. The Chants would seal the win with two free throws from Zach Smith to get the 50-46 victory. The Chants were led by Hayden Grint with 17 points and 11 rebounds. Reese Davenport and Zach Smith would each add 9 points in the win. Coach Gates said “We really showed some resolve to get that win at the end of that game, because when we down with three minutes left we really stepped it up on both ends of the court to get the game to overtime.”

Saturday Night the Chants would travel to Wheeler Central to take on the Renegades. The Chants would start slow but a three pointer by Zach Smith would stretch the lead to 12-5 at the end of the first quarter. In the 2nd quarter the offense would slow down a bit but the half would end the same as the 1st quarter with a three pointer at the buzzer but this time by Mike Thompson to give the Chants a  26-13 lead. The Chants would use the 2nd half to stretch their lead and run away with a 58-33 victory over the Renegades. “It was nice for us to get the win tonight and for us to play a lot of guys. Then to have those guys step up and do some nice things was great to see.” Coach Gates said. Gates added “We need to build on this as we have a tough stretch of games coming up.” Zach Smith had 13 points in th win. Hayden Grint added 12 for the Chants. Solomon Campise chipped in 9. As 9 of 11 Chants scored in the victory. Ord will travel to Burwell on Thursday before hosting St Paul on Friday Night.