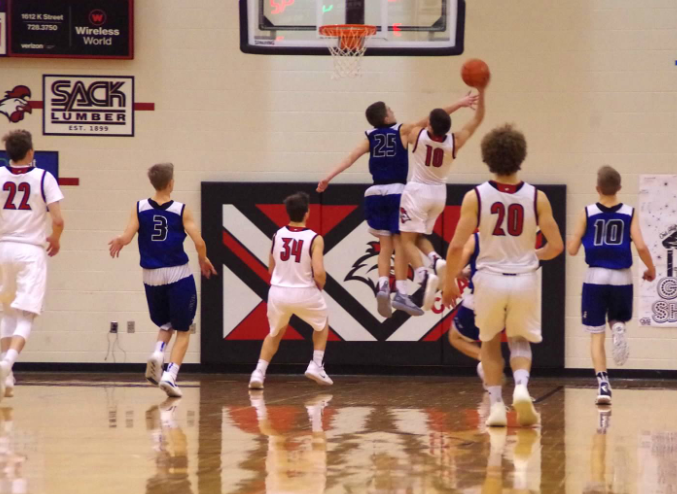 The Chants opened up the week with a trip to Broken Bow to take on the Indians. The game opened with the Chants taking an early lead in the 1st quarter. Broken Bow would close the 2nd quarter with a 6-0 run to take 2 point lead into the break. The Chants would never take the lead in the 3rd but would cut the deficit to 1. The fourth quarter would start with a Chant run to take a 6 point lead. The Indians would try to cut the deficit but the Chants were able hold the lead. Late free throws by Stetson Bredthauer and Hayden Grint would seal the game for the Chants. A last second 3 by the the Indians would cut the lead to 3. For a final of 39-37 “That was a grid it out type of win for us” Coach Gates said. The Chants were led by Solomon Campise with 16 points and Hayden Grint had 11. Stetson Bredthauer and Hayden Grint each had six rebounds for the Chants.

On Friday night the Chants hosted the O’Neill Eagles. The game started slow for the Chants. “We did not play as well to start the game as we have to past few weeks and that really opened the door for them. The first quarter ended with a Solomon Campise 3 which gave the Chants an 11-9 lead. In the 2nd quarter the Chants would stretch their lead to five before half. Early in the 3rd the teams would trade baskets early before the Eagles went on a run to cut the Chant lead. A tip in by the Eagles would beat the buzzer and give the Eagles their first lead since early in the 1st quarter. The 4th quarter did not start well for the Chants. The Eagles would run their lead to four before the Chants went on a 5-0 run to take the lead. The Chants would never lose the lead again. Late free throws by Stetson Bredthauer and Hayden Grint would seal a 48-44 win. “This is a nice win for us we haven’t beaten them in a long time.” Coach Gates said. The Chants were led by Solomon Campise who had 15 points. Stetson Bredthauer added 14 points and Hayden Grint added six rebounds and 12 points. The Chants will close the regular season with senior night vs Ravenna on Friday Night.