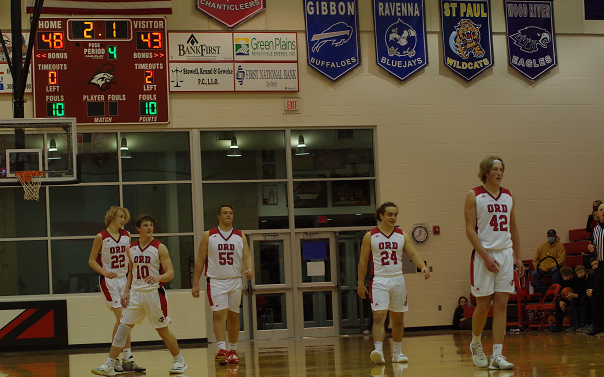 On Friday Night the  Chanticleer basketball team closed the season by hosting the Ravenna Bluejays. The night would also mark senior nights for Bronson Blair, Quinton Ries, Riley Setlik, Tommy Stevens  and Zach Smith. Ravenna started the game hitting four of their first five three pointers in the 1st quarter but the Chants weathered the storm to only be down 12-9 after the first quarter. At the end of the 1st quarter the Chants would have a run that would stretch through the 2nd quarter of 22-6. Giving the Chants a 31-15 lead at the break. “That was a big run for us and we played really well for stretches”. Coach Gates said. The 3rd quarter was more a stalemate between the teams before Ravenna would get hot from beyond the arc again. The Bluejays would begin to chip away at the 15 point lead. The Bluejays would cut down the lead to 8 at the end of the 3rd quarter. The run would continue and the lead would get all the way down to two before the Chants would answer back. The Chants would stretch the lead to seven and seal the win with free throws from Zach Smith. “I am happy for the seniors to get a win tonight they really did earn it and we are happy for them to end the regular season and their last game at home with a win.” Coach Gates said. The Chants will play Broken Bow in C-1-10 Subdistrict in St. Paul. The Chants were led by Zach Smith with 14 points, Johnny DeRiso would add 12 points. Quinton Ries would have seven rebounds and eight points in the win.