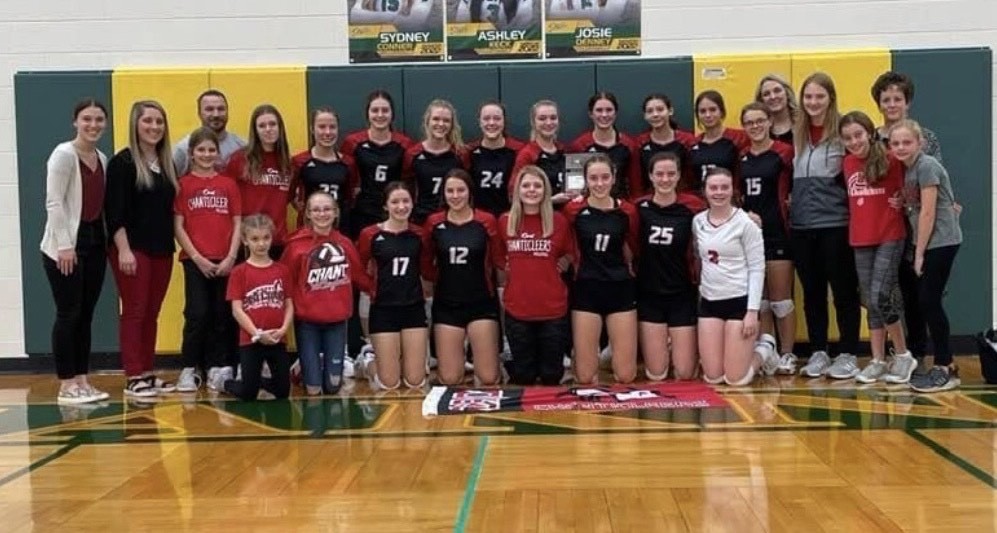 The Lady Chants have known that adversity creates success if you keep going, never give up, and battle for each other. At the end of October, the Lady Chants were seeded #2 in their Sub-District. They came up against O’Neill in the first round. During that match, this group of girls proved their skills through fluid and dynamic play with a 3-0 sweep of O’Neill. During this match, the Lady Chants came out strong, taking the first set 25-16. Kaidence Wilson established dominance early with the help of the Chant defense and passing. The Eagles battled back in the second set but the Lady Chants were still strong with a 25-23 win and the Lady Chants took the third set for the sweet 25-19. In this first match, Wilson led the Chants with 14 kills, Marin Reilly with 8 and Lexi Vancura with 7. Ali Miller earned 3 aces at the line along with 8 digs. Defensively, the Chant’s outside hitters, Marin Reilly and Britta Deden led in digs with 22 and 16 respectively. Shaylee Jacobs, senior setter, ended this match with 33 set assists. With the win of this match, the Lady Chants were then matched up with the #1 seed, Ainsworth Builldogs for the following night.

The Lady Chants worked hard on composure, focus and ability to battle for each other, claiming their team as high importance. These ladies loaded onto the bus for the second trip of the week to Ainsworth, Nebraska.

Ainsworth came out of the gate strong, leading the Chants 2-0 in the first two sets (22-25, 17-25). However, these Chanticleers were not done. “Serve receive is such an essential part of the game, and we really picked up our game in serve receive and first contact in the third set. These ladies focused in and trusted in the process to improve this part of their game”. Shared Coach Smith. The Lady Chants took the 3rd set 25-19, followed with a 4th set with of 25-15. “Going into the 4th set, I knew we were back in rhythm,” shared Coach Smith, “what I have learned about these ladies this season is that if they are in rhythm, they can beat anyone so as a coaching staff we kept them on the court as much as possible, even not allowing them to sit down at time outs, we had our student managers bring their water bottles to them and kept them out there”

This proved successful for the Chants as they entered into the 5th set, the small but mighty crowd of parents and fans rallied around the Chants and with the help of Floor captain, Shaylee Jacobs, the lady chants won the toss and took serve to aid toward their strengths. “We have been tough at the serving line all year,” stated Coach Smith, “when the ball is in our hands we score 60% of the time, in short matches that means a solid serve and defense are our strengths”. This proved true for the Lady Chants as they took an exciting 5th set 15-11 and finished their time in Ainsworth with the reverse sweep.

“I was so proud of these girls for achieving this goal, no one in this group have ever made it past night one of any sub-district, getting to this district final match was a step towards where they wanted to be and they battled to get there. I was very proud of their effort as a team”. Stated Coach Smith

In the Ainsworth match, Kaidence Wilson and Marin Reilly both led the offense with 17 kills each, along with those kills they both had 5 ace serves. Wilson led blocking with 5 total blocks. Britta Deden led the defense in digs with 32, followed by Marin Reilly with 27 and Ali Miller with 24. Shaylee Jacobs attained 42 set assists.

The Lady Chants were then paired up with #1 in the state, Kearney Catholic. The match was set in Kearney on Saturday the 30th. This team battled hard and although came up short with a 0-3 loss, they stayed together the entire time and worked hard for each other. During this match, Kaidence Wilson led the Chants with 6 kills, Marin Reilly had 5. Brooke Fox led the Chants at the serving line with 2 aces. Kaidence Wilson had 4 total blocks. Ali Miller led the chants defensively with 13 digs and Marin Reilly followed with 9. Shaylee Jacobs rounded out the offense with 16 set assists.

As a young team, we will return all but two players, saying goodbye to Shaylee Jacobs and Journi Moran. Shaylee and Journi, thank you for all you have given to this program. We know you will do great things! We are always here for you and love you! 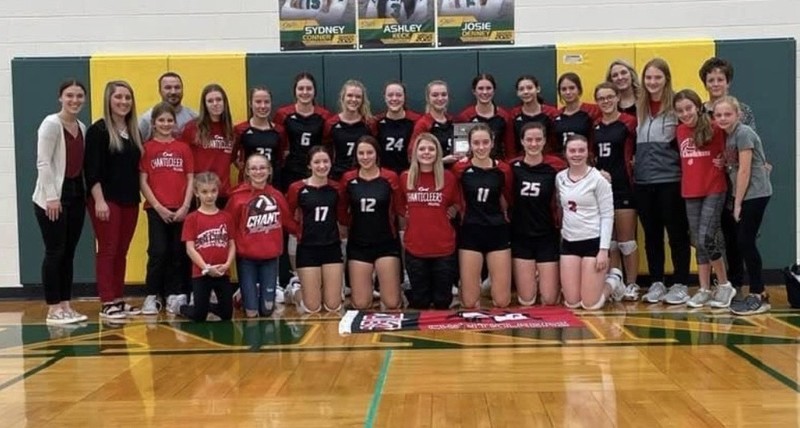