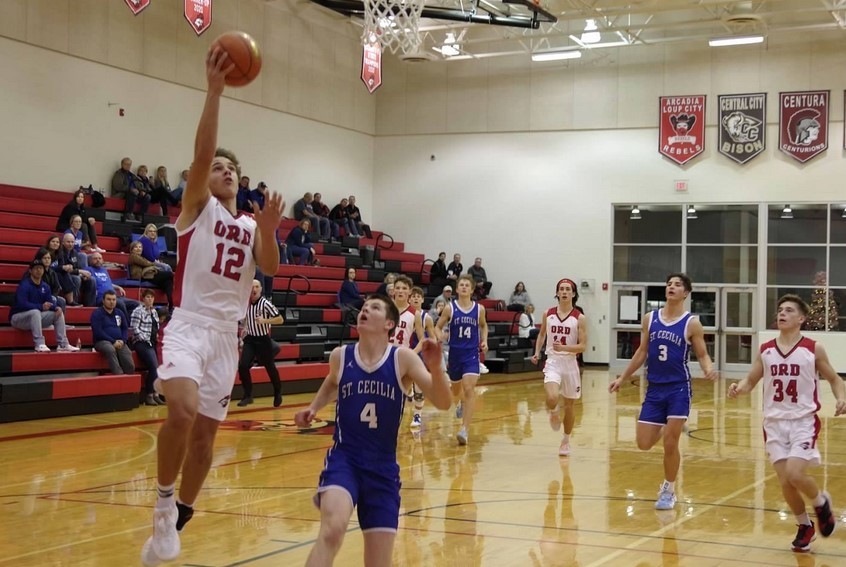 Chants Drop A Couple Close Ones

The Chants played their first game at home after the holiday tournament vs the Cozad Haymakers. The Chants and Haymakers played a back and forth first half with the Chants taking a one-point lead at halftime. “We played really well in that first half but weren’t able to grow the lead out as much as we needed.” Coach Gates said. The second half would feature a game that was much like the first half but this time Cozad would take a one-point lead after the 3rd. With a minute and half left Cozad would grow the lead to 8 and look like they have finished off the Chants but the Chants would rally. John DeRiso would score 7 points in a row for the Chants capped off with a lay up with 15 seconds left to tie the game again. “We could have shut it down when we were down 7 but we didn’t.” Coach Gates said. Overtime would reflect the game with the teams trading buckets. Cozad would be up three when a three-pointer by Will Grint would trickle off the rim and the Chants would fall 59-56. “That was a good basketball game but someone had to lose and I guess it was us today but I am really proud of how we played and our effort.” Coach Gates said. The Chants were led by John DeRiso with 17 points and eight rebounds. Blake Hinrichs added 11 pointes. Blake Wells and Cade Geiser added eight points each.

On Friday the Ord Boys traveled to Gibbon to take on the buffalos. The Buffalos started the game on a 7-0 run before the Chants scored but the Chants responded with an 8-1 run. Then the Chants would start to build a lead and would secure a six-point halftime lead. The Buffalos would rally back at the end of the 3rd and cut the lead to one. The 4th quarter would have the Chants score 3 points. Which allowed the Buffalos to sneak away with a 5 point victory. “We really went cold from the field in the 2nd half but our defense really gave us a chance to win.” Coach Gates said after the game. The Chants were led by Will Grint with 16 points. Cade Geiser added eight rebounds for the Chants. The Chants will host Burwell on Thursday before traveling to St. Paul on Friday.