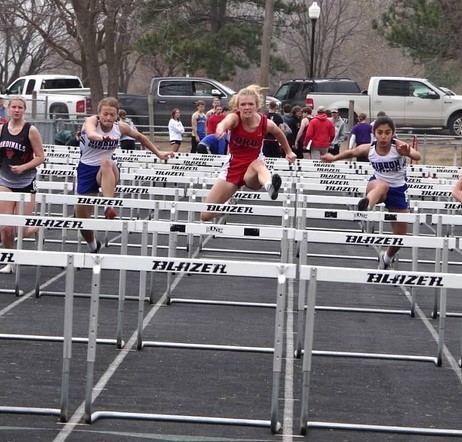 Fifteen members of the Ord High Track and Field teams competed in the annual Central Nebraska Track Championships held at Northwest High School in Grand Island on Monday, April 25.  Members of the teams that competed only brought home one medal from the meet, but they had several personal and season best performances.  “Overall, I was happy with the way our kids competed in this meet”, Coach Derry Trampe stated.  “We had a lot of quality performances on the day with several fourth-place finishes on the day.  That is tough when they award three medals per event. It was just nice to have a good day to compete and to compete against the very best in our area.”

Britta Deden brought home the lone medal for the Chants as she finished third in the 300-meter low hurdles in a personal best time of 48.33.  Her time was more than two seconds faster than her previous best this year. “Britta had a very good day on Monday”, Trampe said.  “She had personal best times in both hurdle races and the 4 X 100 relay had their best time of the season.”  Deden finished fourth in the 100 high hurdles in a personal best time of 16.33 and she teamed up with Journi Moran, Lexi Vancura, and Kaidence Wilson on the 4 X 100 to finish fourth in a season best time of 51.88.  Also finishing fourth and just missing the medal stand were Lexi Vancura in the triple jump (34’ 4”) and Blake Wells in the pole vault (12’ 9”).