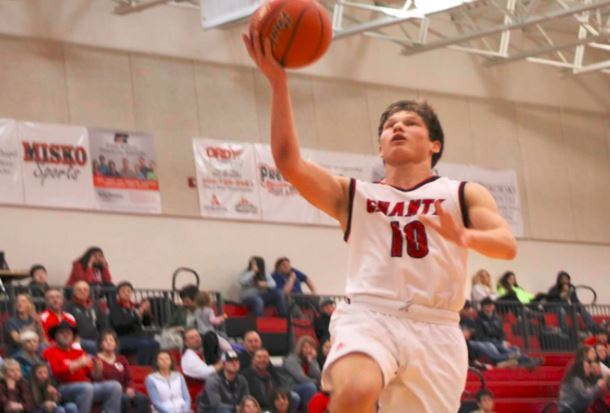 The Chants started the week by traveling to Hastings to take on Hastings St. Cecilia on Tuesday. In the first quarter both teams felt each other out with the Bluehawks taking 9-8 lead. In the 2nd quarter the Chants would take a brief lead but the Bluehawks would rally to take a 22-17 lead. The 3rd quarter the Chants would begin to go cold from the field but their defense would keep it close.. Allowing the Bluehawks a chance to take a 8 point lead going into the fourth. The Chants would cut the lead to three with three minutes left but were unable to get over the hump. Allowing the Bluehawks to defeat the Chants 38-27. The Chants were lead by Zach Smith with 10 points. “Our defense keep us in this game and that will keep us in a lot of games this year but in the end you have to put the ball in the hole to win games.” Coach Gates said after the game.

On Thursday, the Chants would get their first home game vs conference foe Central City. The Chants were able to take a big lead in the 1st quarter and never look back. Coach Gates said “It was nice for us to have a fast start and see lots of guys contribute, we got good minutes out of Stetson Bredthauer, Michael Thompson, Ethan Jeffres and Jaden Riley.  “We had success on both ends tonight and were able to control the game from start to finish tonight.” The Chants would stretch the lead to 33-17 at the break. From there the Chants would keep their distance from Central City and win 56-39.The Chants were led by Riley Warner and Solomon Campise with 14 points each. Zach Smith kicked in 11 points and Reese Davenport added 9 point in the Chant victory.

On Saturday, the Chants took the road again to take on C-2 number seven and conference opponent Centura. The Chants started fast like Tuesday but Centura was not going to go away. The Chants would run their lead to 12 early in the 2nd quarter. Centura would rally back to cut the lead to 27-23 before halftime. The 2nd half would open with Centura taking the lead and stretching the lead to six in the 3rd quarter. The Chants would have an answer and tie the game up before the end of the 3rd  34-34. The teams would trade leads for most of the 4th quarter before the Chants would open up a 7 point lead with 2 minutes left. The Chants would seal the win when Reese Davenport hit a free throw to push the lead 54-50. The Chants were led by Solomon Campise with 22 points. Hayden Grint added 16 points and 19 rebounds in the victory. After the game Coach Gates said “This was no doubt our most complete game this year. Our guys really had to scratch and claw to win this one.” The Chants are now 2-3 and will be at home on Tuesday to take on West Holt before traveling to Cozad on Thursday before the Christmas Break.