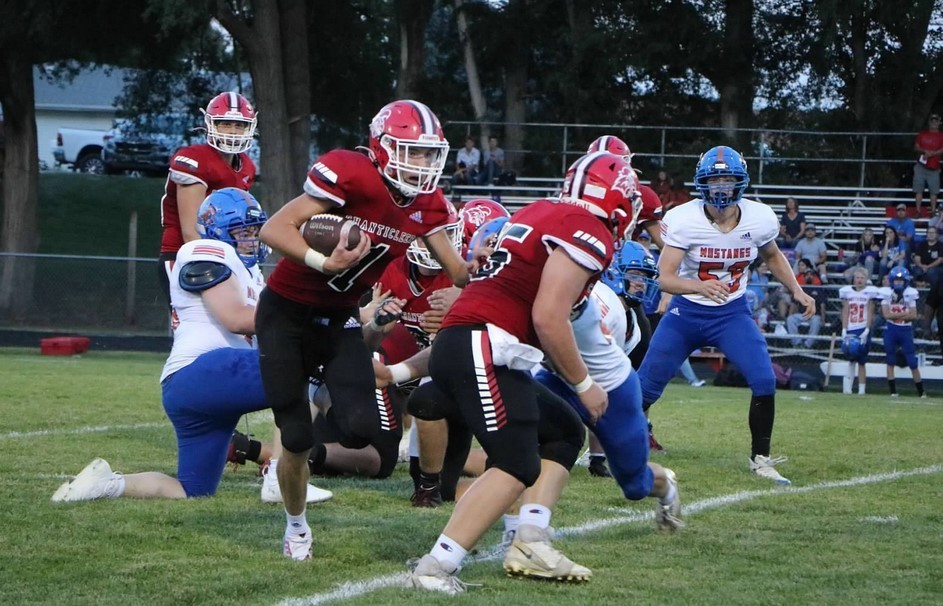 ORD - The Ord Chantcileers were at home for their fourth game of the regular season to take on the Gordon Rushville Mustangs. The Chanticleer got off to a bit of a slow start in the 1st quarter as it was scoreless. Both defenses were battling it out. The Chants had a big second quarter as they would score 21 points. Blake Hinrichs had 3 rushing touchdowns in the quarter followe by 3 point after attempts by Talan Bruha. Talan Bruha also had a blocked punt in the quarter which led to one of the scores. The Mustangs were able to get on the board at the end of the second quarter to make the score at half 21-7. In the third quarter the Chants scored the only points of the quarter when Blake Hinrichs connected with Talan Bruha on 27 yd pass and catch. The 3rd quarter ended with score being 28-7. The Mustangs scored first in the 4th quarter to inch closer in the game but on the ensuing kickoff Trent McCain scored on a 94 yd kickoff return to make it 34-14. The Chants scored one more time in the game when Blake Hinrichs found Talan Bruha on a 28 yd pass and catch for the score to make it 41-14. The Mustangs added one more score against the Ord second team and the final was 41-20. The Chanticleers forced 5 turnovers in the game. Two interceptions by Talan Bruha and Blake Hinrichs and three fumble recoveries by Talan Bruha, Will Skibinski and Colton Thompson. Ryan Gabriel led the team in tackles this week with 15 total tackles. Coach Wells commented after the game, “Our young men played hard tonight. We are still finding our way defensively and offensively after having to shuffle guys around because of some bad luck with injuries. We will keep improving over the next couple of weeks. Our guys are resilient and will step up. That was a great tribute after the game for Coach Streeter coaching in his 400th football game. He has been a rock for Ord’s football program for many years. He is a great man and has had a tremendous impact in our school and for our young men for many years.” The Chanticleers will be on the road to Gibbon this week.