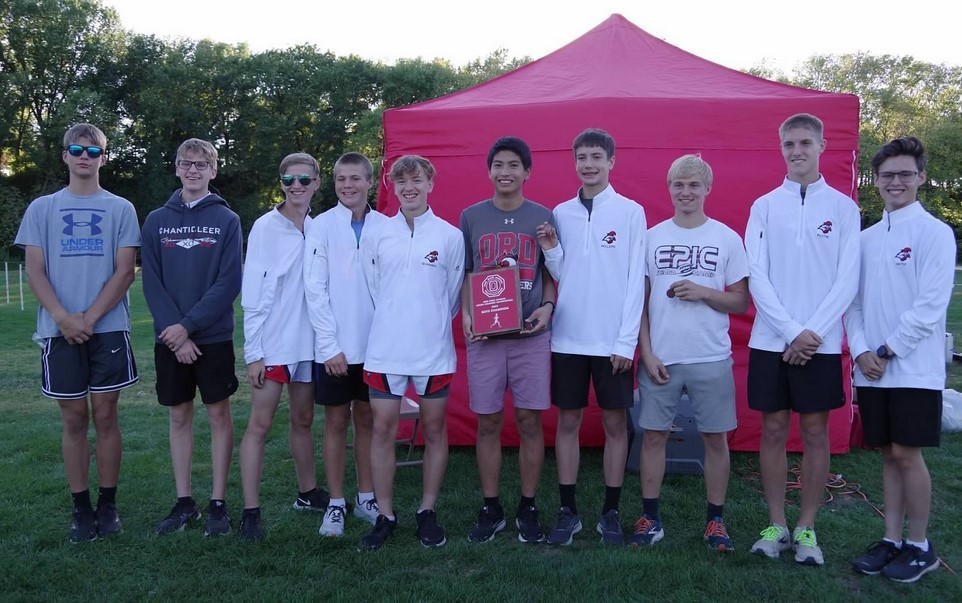 The Ord High School cross country teams hosted their home invitational on Friday, September 23 at the Ord Golf Club.  The Chanticleer boys won the team race while the girls finished 4th in the 15-team field.  This was the first time since 2010 that the boys claimed the team title.  “I was very happy that our boys were able to win the meet”, Coach Derry Trampe said.  “We have not won our own meet very often and it has been a while.  They have worked hard this year and it is nice to see good things happen for them.  I was also pleased that our girls were able to finish in 4th.  We have limited numbers this year which makes it tough to finish high in meets.  I am glad to see them have success as well.”

The Chanticleer boys scored 22 points to edge out West Holt (29) for the team title.  Gibbon was a distant third with 59 points. Rounding out the team scoring were: Wood River (64), Arcadia-Loup City (90), Sandhills/Thedford (96), Riverside (125), and Fullerton, Ainsworth, Plainview, Ravenna, Twin Loup, St. Edward, Ansley/Litchfield, and Central Valley did not field enough runners to score in the meet.  The girls scored 70 points to finish in 4th place.  West Holt won the meet with 20 points while Fullerton (33) edged Ravenna (34) for second.  Arcadia-Loup City was fifth with 75 points.  Ainsworth, Riverside, Ansley/Litchfield, Plainview, Central Valley, Wood River, St. Edward, Twin Loup, Sandhills/Thedford, and Gibbon did not field enough runners to score as a team.

Izzy Jeffres was the top finisher for the girls again this week.  Jeffres earned a medal by finishing 18th in a time of 25:43 over the 5,000-meter course.  Skylar Kokes just missed out on a medal as she finished in 22nd place in a time of 26:56. Koryn Klein was 34th in 31:49 and Elisabeth Bengston was 36th in 32:51 to round out the placings for the Chants.  “Our girls are working through some injuries, so I was very pleased to see Izzy pick up a medal”, Coach Trampe said.  “We rested them this past week to allow them to recover and I feel like we are fairly healthy at this point.  Now we just need to work on getting our running shape back.  I am confident that we will see a lot of improvement with our girls in the next couple of weeks.”

Masaki Arisawa, Garret Severance, Owen Lane, Elijah Pollard, and Grady Moudry all won medals in the meet by finishing in the to 20.  Arisawa was 3rd in a time of 18:28, Severance was 5th in 18:46, Lane was 7th in 18:52, Pollard was 10th in 19:03, and Moudry was 16th in 19:39.  “It was great to see this many guys earn medals”, Trampe said.  “They got out and competed very well in the early part of the race and continued to run well throughout the entire race.  I was happy with how close our runners finished together in this race.  This is what will make them a very good team moving forward.”  Brodie Klimek served as the second pusher for Ord and was just out of the medals in 23rd place.  Klimek finished in a time of 20:39.  Not far behind Klimek was Hayden Kluthe who finished in 27th place in a time of 20:54.  “Brodie and Hayden both continue to run great races”, Trampe noted. “Both ran their fastest time ever at our meet this week.  In a lot of years both guys would be in our top 4 or 5 runners.”  Also competing for the boys were Isaac VanLeer (40th in 22:36), Gage Sintek (41st in 22:40), and Skyler Probst (56th in 26:14). “Isaac and Gage continue to get stronger every week”, the coach said.  “I am pleased with the progress they have made, and I am happy with the way Skyler has been running both in meets and practice.”

Gavin Whited earned a medal in the junior high boys’ race by finishing 6th in a time of 7:46 over the 2,000-meter course.  Avery Bruha continued her successful season as she finished 5th in 8:25 in the girls’ race.  Sophie Zangger also competed in the race and had one of her best runs of the season as she finished 28th in a time of 10:18. Also competing in the boys’ race were Conner Krcilek (21st in 9:02), Jacob Medina (23rd in 9:14), Kyptan Scheideler (29th in 9:35), and Leo Wolf (34th in 9:50).  The girls did not have enough runners to score in the team race and the boys finished in 4th place with 63 points.  Central Valley won the team title in the boys’ race with 33 points while West Holt won the girls team title with 17 points. “I am very happy with how our junior high kids are competing”, Trampe said.  “They have become more competitive as we have progressed through the season and are becoming good runners.”