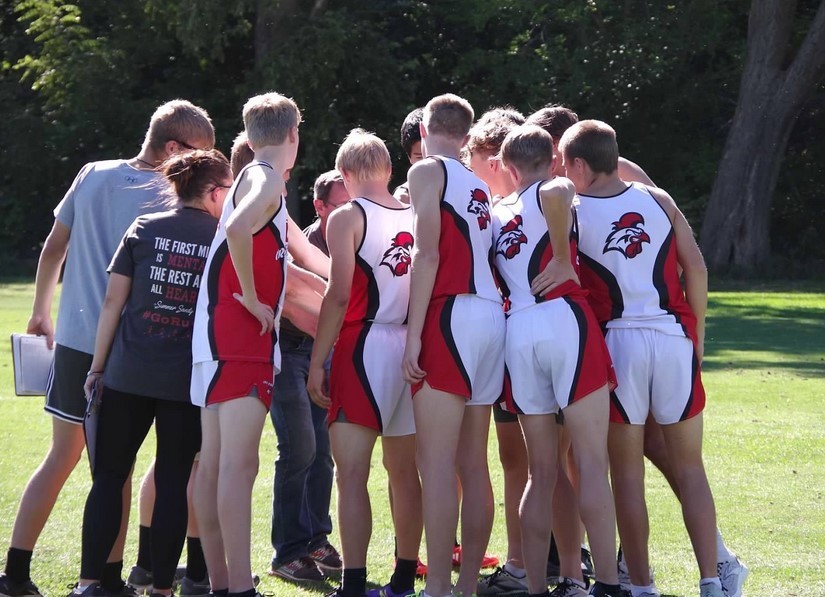 For the first time in 10 years the boys cross country team brought home the team title from the LouPlatte conference meet.  The team scored a meet low 17 points to easily outdistance second place Doniphan-Trumbull (41).  “I was very proud of the way our boys ran in this meet”, Coach Derry Trampe said.  “Owen hurt his ankle the night before and was not able to compete and the other guys really stepped up and ran well.  Nearly all of them had their fastest race of the season.”  Gibbon finished third with 59 points with Wood River in fourth with 64 points.  St. Paul was next with 82 points followed by Arcadia-Loup City with 97 and Centura with 100.  Central City and Ravenna did not field enough runners to score in the team race.

The Chanticleer girls finished 3rd in the team race with a total of 60 points.  Doniphan-Trumbull claimed the team title with 16 points.  Ravenna finished as runner-up with 21 points.  “I felt good about the way our girls competed in the meet”, Trampe said. “We had two girls that brought home medals from the meet, and we saw improvements in our times.  We are thin on numbers and that limits us a little in the team races.  However, I am pleased with the progress we have made this season.” Arcadia-Loup City finished 4th right behind the Chants with 61 points.  Centura, Central City, Gibbon, St. Paul, and Ravenna did not field enough runners to score in the team race.

Izzy Jeffres and Skylar Kokes brought home medals from the girls meet as they finished 13th and 14th respectively.  Jeffres completed the 5,000-meter course in 25:02 while Kokes finished in 25:36.  “Both Izzy and Skylar ran great races today”, Trampe said.  “They are coming off some injuries and they look a lot stronger now.  Hopefully, this will carry over to next week.” Also scoring for the team were Koryn Klein and Elisabeth Bengston.  Klein finished 23rd in a time if 30:10 and Bengston was 27th in 33:38.  “Both Koryn and Elisabeth are trying to work through injuries and they are still running competitively”, Coach Trampe commented.  “We are going to rest them this next week and get them ready for the district meet.”

Four boys finished in the top eight and earned medals from the conference meet.  Masaki Arisawa (2nd in 18:16), Garret Severance (3rd in 18:19), Elijah Pollard (5th in 18:51), and Grady Moudry (8th in 19:06 were the medal winners and scoring runners for the team. “Our boys had a very good day in the fact that our third and fourth runners really closed the gap on our top runners”, Trampe noted.  “I have been really impressed with how our younger runners are improving as we go through the year.  We just need to keep improving as we finish out the season.”  Pushers for the team this week were Brodie Klimek and Hayden Kluthe.  Klimek just missed earning a medal as he finished 17th in a time of 19:49 over the 5,000-meter course.  Kluthe was not far behind as he was 22nd in 20:11.  “Brodie and Hayden are both running as well as they have in their careers”, the coach said.  “They are consistent performers and just keep running solid races for us.  It is a lot of fun to coach when all your kids are this close together.  I can’t remember the last time that we had less than two minutes separate our top runner and our sixth runner.”

The Chants had four boys that competed in the junior varsity race at the meet.  Gage Sintek was the top finisher as he placed third in 21:39.  Isaac VanLeer was 5th in 22:10 and Skyler Probst was 6th in 23:03.  Braden Bruha finished 11th in a time of 25:08. “Nearly everyone of these guys ran their best time of the season”, Trampe said.  “I thought Gage ran his best race of his career as well as Skyler.  Issac ran a solid race, but he has been having issues with his knees and that has slowed him a little.  Braden has been trying to work through injuries these past few weeks and they have made it tough for him to run his best.  I am proud of the way our kids have worked to make our team better.”

The Chants will compete in the C-4 district meet in Hastings on Thursday, October 13.  The meet will be held at the Elks Country Club in Hastings with the boys running first at 3:30 pm and the girls race starting at 4:30 pm.  Teams in the C-4 district include: Adams Central, Aurora, Central City, Fairbury, Filmore Central, Gibbon, Holdrege, Kearney Catholic, Minden, Ord, South Central Unified #5, and St. Paul.