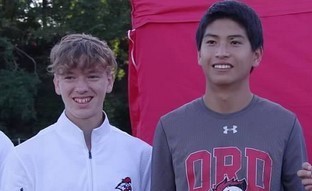 The Ord High School Cross Country teams were represented by two participants in the Class C state cross country meet in Kearney last Friday.  Sophomores Masaki Arisawa and Garret Severance both competed in the state meet for the first time in their careers. “You never know how a runner is going to react the first time they come to a state meet”, Coach Derry Trampe commented.  “Sometimes they are relaxed and run the race of their life and other times the nerves get to them, and they don’t perform like you hope they will.  For our guys today I think they were a little nervous and didn’t run as well as they had hoped.  I am not disappointed in how they ran but I think both were a little down after the race.”  Arisawa was the top finisher for the top finisher for the Chants as he finished in 66th place in a time of 18:56 over the hilly 5,000-meter course.  “Masaki did a great job of keeping his pace steady throughout the race”, Trampe said.  “His first mile was a decent first mile and he just kept passing people through the last 2 miles of the race.  He just needed to be a little further up at the start.”  Severance finished 81st in a time of 19:14 for the race.  “Like Masaki, Garret got out in a decent time he just needed to be further up at the mile”, Trampe said.  “I think he felt like he was out too fast and tried to slow his pace down and when you do that, it is hard to pick back up and get going again.  He looked like he was struggling for the last mile of the race, but he made it to the finish line.  This will be great experience for him in the future.”  Severance will return next year along with three other members of the varsity team.  Arisawa will not be back to compete next year as he will be back home in Japan.  “It was great to have Masaki as part of our team this year and for him to experience a state meet”, Trampe noted.  “I am looking forward to next year as we have a lot of talented runners back and we will have some freshmen that will step in and help our teams out right away.  We have a lot to look forward to next year.  Now we just need to keep running and be ready to go next fall.”