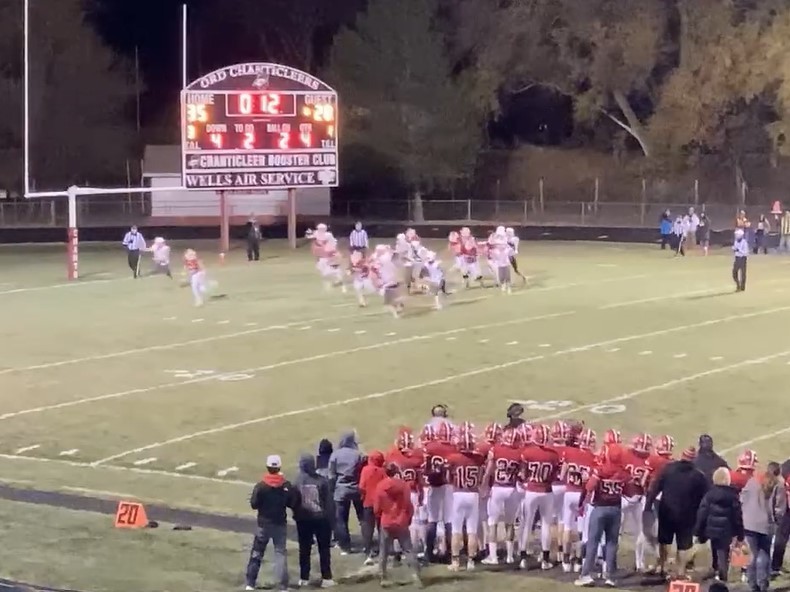 Chanticleers Win Thriller Over the Knights

Ord - The Ord Chanticleers were at home again this week in quarterfinal action to take on the Oakland Craig Knights. In the highly anticipated game, the Knights to the opening kickoff and marched the ball down the field to take an early 6-0 lead. That lead wouldn’t last long when on the Chants first offense play Blake Hinrichs connected with Colton Thompson for 65-yard completion down to the 4-yard line. On the next play, Trent McCain ran it in from 4-yards out. The Chants would tack on the extra point to take the lead 7-6. After forcing the Knights to punt the next possession that Chants turned the ball over and the Knights capitalized driving the ball from mid field and scoring on a 2-yard run to take the lead 14-7. On the ensuing kickoff, the OC recovered the short kickoff. The Knights drove 20-yards and Ryan Gabriel forced a fumble that was recovered by Blake Hinrichs. On the next play Trent McCain scored on a 79-yard touchdown run to make the game 14-14. The Knights took the ball down the field and scored on a 31-yard touchdown run. After the 2-point conversion the Knights took the lead 22-14. The Chants went into their 2-minute offense and drove the ball down field and missed a field goal before halftime.  The Chanticleers got the ball to start the second half and scored on a 2-play drive when Blake Hinrichs scored on a 39-yard touchdown run. The Chants decided to go for two and Trent McCain found Colton Thompson in the corner to tie the game at 22-22. The rest of the quarter was back and forth and with Chants defense making a huge goal line stand to deny the Knights the lead. After failing to move the ball, the Chants punted the ball away and the quarter ended with the same score. At the beginning of the fourth quarter, the Knights scored on a 1-yard touchdown. After a failed 2-point conversion, the score was 28-22. The Chants took the kickoff and went down the field again and Blake Hinrichs scored on a 2-yard run to tie the game again 28-28. The Chant defense came up big again forcing the Knights to punt. With the clock running down, the Chants drove the ball to the 20-yard line and Blake Hinrichs found Jaden Sanders on 20-yard pass and catch. After the extra point the Chants lead, 35-28. The Knights showed no quit when they drove the field converting on multiple 4th downs. They moved the ball down the field to the Chants 2-yard line and on 4th down the Knights rolled out to their left and threw a pass that was knocked down by Colton Thompson to end the game. The Chants Coach Wells commented after the game, “What a fantastic game, both teams played their hearts out. We are so proud of the fight in our kids. We made multiple mistakes in the first half, and we were able to keep our composure and play a great second half. Our offensive and defense lines have been the strength of our team all year and they played like full grown men tonight. We’ve fought through a lot of adversity this year and it’s a testament to how tough minded our young men are.” The Chanticleers will be on the road to play Norfolk Catholic in the C-2 State Semifinals.