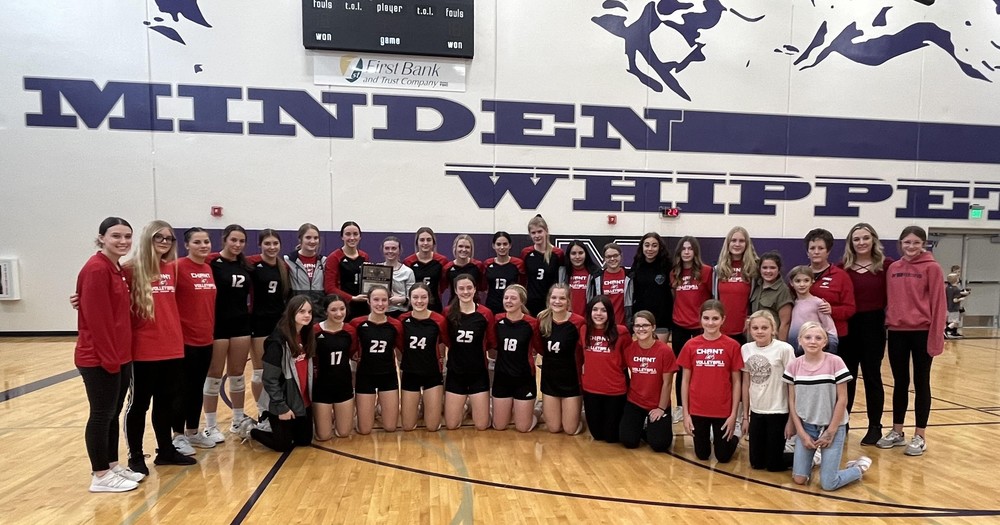 The Chanticleer Volleyball team ended their season with a loss to a skilled Minden team in District Finals. “This Chanticleer team has worked hard all season and has done great things for the future of Ord Volleyball” states Coach Smith, “these fantastic young women will go on to be wonderful adults and do many wonderful things in their lives.”

All season, this team was led offensively by Kaidence Wilson who totaled 348 kills this season with a hitting efficiency of .323, 56 blocks, and 36 aces. Coach Smith shares, “Kaidence has been an incredible athlete since the day she came into the gym as a freshmen. It has been a joy to watch her grow and lead this team in a successful season. I know she has a bright future ahead of her.” Another senior, Alison Miller, Chant libero wore the white jersey for the Chants this year totaling 320 digs this year with a SR stat of 1.97. “Ali has been a vocal leader for us that will be missed, she is such a solid player and often times you do not see her contribution in the stats but every play starts with the first contact. Ali often put is in great positions to run our offense by making that first contact solid.” States Coach Smith.

Quieter but mighty senior leaders were Lexi Vancura and Britta Deden. “Lexi is one of those athletes that you wish you could get just a couple more years of time with, she has such a high ceiling as an athlete, and I know that she will do great things on the basketball court and with track and field. She is a great teammate and always hyping up practice. She will be greatly missed” shares Coach Smith, “Britta really stepped up to the plate in the Ainsworth match with a kill inside point 23, she has done her job all year and is another athlete that will be very fun to watch as her career unfolds. All of these seniors have worked hard for Ord athletics. Chant volleyball is grateful for the time they have put into this sport.

The Chanticleer volleyball team had other major contributors this season with setter, Brooke Fox, who ended the season with 771 set assists and 39 aces; Marin Reilly with aces (39) kills (182) digs (238) and serve receive stats (1.91); Maggie Fischer with 139 digs, Jamie Vavra with 46 blocks and 78 kills, Bailey Setlik and Kaci Bruha.

The entire Chant volleyball team were top 5 in the area all season long with aces per set, total aces, hitting efficiency, set assists per set, and kills per set. Returning for the Chants next year will be 6 juniors, 3 sophomores and 10 freshmen.  Thank you to our coaching staff, volunteers and school supporters. We would also like to send a huge thank you to local businesses who donated throughout the year. Lastly, thank you to parents for always supporting the Chants and providing us with meals. We are very grateful.