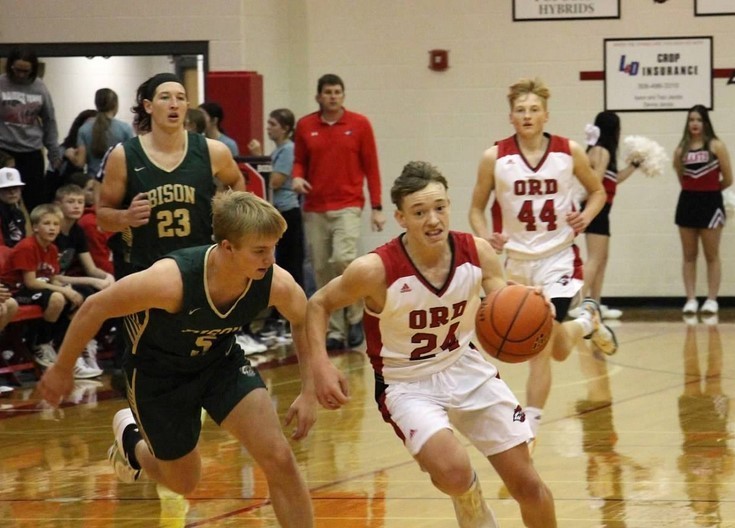 On Friday, the Chants traveled to take on the Ainsworth Bulldogs. In the first quarter, the Chants started strong but an 8-0 run by the Bulldogs gave the Bulldogs a 12-point lead at the end of the 1st quarter. “We had a lot of guys in their first varsity game tonight and it showed in that opening quarter but we really came around after that 1st quarter.” Coach Gates said. The Chants would find themselves down 11 going into halftime. Another short lull would allow the Bulldogs to push their lead to 15 and the Chants would not be able to get any closer falling to the Bulldogs 60-41.”We did some good things tonight and it gives us something to look forward to as the season goes on.” Coach Gates said. The Chants were led by Blake Hinrichs with 13 points and nine rebounds. Garret Severance added 12 and Colton Thompson had 11 for the Chants. Elijah Pollard had eight rebounds for the Chants.

Saturday afternoon the Chants hosted the Top 5 ranked Central City Bison. The Chants held their own in the 1st quarter but a late run before half around the Bison to take a 20-point lead. The Bison would then go on a 15-0 run after the 1st minute of the 3rd quarter leading to a 36-74 victory over the Chants. The Chants were led by Blake Hinrichs with 15 points and nine rebounds. Garret Severance added 10 points for the Chants. “That was a really good team that we played tonight but had some moments of playing right with them. We need to extend those moments as we go down the road.” Coach Gates said after the game. The Chants will host West Holt on Tuesday before traveling to Kearney Catholic on Friday.